Stop waiting for traffic. For as little as $5/day you can get leads, sales, and reach new audiences by tomorrow.

Obviously, the holy grail of online marketing is going viral or ranking #1 in Google.

But that happens about as often as winning the lottery.

If you’re still reading, I’m going to assume you don’t already have tons of visitors coming in from Google. And you’ve probably not gone viral either.

Tell me if this sounds like your current situation…

In 2012, I stumbled onto a new way of getting traffic to my sites that I didn’t see anyone else doing. Best part, I was getting results with as little as $5/day.

Turns out I wasn’t the only one stumbling onto this new way of getting website traffic.

Major brands started doing what I was doing. Other Internet marketers picked up on it too.

The name that finally stuck, was “Native Advertising.”

It’s called native advertising because to the end user it doesn’t appear to be an advertisement. Which is exactly what makes it so effective. 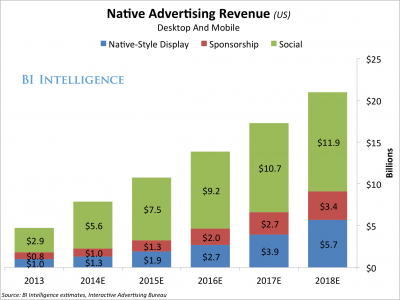 It’s not just me saying this either. Here’s what major media outlets and research firms are saying about native ads…

“Social-native, including Facebook News Feed ads and promoted tweets on Twitter, will draw a majority of native ad revenue between 2013 and 2018.” – BusinessInsider.com

“Consumers are 25% more likely to look at a native ad than a banner, and they look at them 53% more frequently.” – CMO.COM

What Makes Native Advertising Better Than Any Other Form of Marketing?

Like any other form of marketing, native ads generates sales. However, what it does above and beyond other methods is…

Yes, it does. But the reason why it works so well is because you’re driving paid traffic to essentially what adds up to be blog posts.

Google starts thinking your site is more popular because it all of a sudden has more traffic than normal.

Industry influencers see your blog posts and retweet them.

Now you’re beginning to see why so many companies are switching all of their marketing budget to native advertising.

If you think it’s as easy as just paying for clicks to your blog, you’ll be mistaken. When I first tried this, I lost money. I spent a little over $30,000 testing different types of content, different blog layouts, and studying persuasive writing.

I’m not saying you need a degree in astro physics. Native ads is still easier than any other marketing method you’ve tried, but it’s not magic either.

Native Ads Are Not Magic, You’ll Need To Follow a Simple Process To Make It Work

There is a process you need to follow. Otherwise you’ll be paying for clicks that read your blog posts and leave without doing anything else.

If you want those readers turning into leads and sales, you’ll need to change a few things on your site first. Then learn how to to create your content in a way that makes it compelling. And where to spend your money for the best ROI.

Which is why I created Bulletproof Native Ads, a course that teaches you how to get started with native ads the right way.